The Pathways for Prosperity commission on technology and inclusive development held meetings in Delhi alongside the Global Development Conference - this year focusing on science, technology and innovation for development. The lively discussions helped the commission to understand the Aadhaar process, the current debate, and to think about the policy lessons from what is the world’s largest biometric digital ID initiative.

Prakhar Misra and Meena Bhandari summarise some of the key debates around India’s national digital ID experiment, and what it means for the most excluded and marginalised populations.

India is the second most populous country in the world and its vast economic, social and geographic diversity had confounded the accurate and efficient delivery of subsidies and services. Corruption, ‘leakages’ and access, particularly women’s access to the right programs, were a huge challenge in a pre-Aadhaar era. Despite various initiatives prior to Aadhaar, none were robust enough to allot a unique, tamper-proof identity; moreover, identities were often difficult ascertain, track and verify, thereby hindering access to services and government subsidies. The latest technology was then employed to de-duplicate names on existing beneficiary lists and enrol everyone, including those previously un-enrolled on a system.

Aadhaar is a unique identifier that digitally holds residential, contact and biometric details. Identities can be authenticated with fingerprints or iris recognition at a machine at designated centres. Once authenticated, the subsidy is transferred directly to a bank account linked with the same Aadhaar number, taking care of effective delivery and correct targeting of an individual.

Since registration started, the government claims that Aadhaar has delivered significant efficiencies and ensured people get the services and welfare to which they are entitled. There is some evidence that Aadhaar has reduced corruption and leakages on the ground, and the government claims that it has saved 11 billion dollars as a result. However, there is great variance and a lack of data on Aadhaar’s impact, and methodologies have been contested by some analysts.

Apart from the questions on official data and evidence, India has been gripped by a post-implementation debate with the Supreme Court involving several critical rulings around issues of privacy, data security and the Aadhaar bill itself. The big question is whether India put the cart before the horse by implementing Aadhaar without fundamental regulations to deal with privacy and security of data. While Aadhaar has improved access for many, there are growing reports that the poorest and most marginalised families and communities face systems failures (e.g. labourers whose fingerprints have worn out) with no redressal process in place. In extreme cases, the denial of food subsidies has led to reports of deaths through starvation. In a perverse twist, the system has failed to help some of the most vulnerable people it had set out to protect and include. As a result, the debate has become highly polarised - should India continue or halt the program?

While many countries are apprehensive about the risks of creating a potential Big Brother state, India did not have a national debate before people’s private data was collected. The misuse of data by government has been very much a cause for concern in India, and indeed globally. Indeed, recent media reports highlighted the covert selling of information from the Aadhaar database. There have also been reports of various government departments openly publishing data from the Aadhaar database on their websites.

Trust, responsibility and ownership (who regulates the regulators, can government be trusted etc.?) are hotly debated. Answering such meta questions on privacy and data misuse – albeit long overdue - is crucial to the success of such a program, especially given that the personal information of a billion plus people is already in the hands of the state (and possibly also with others).

Aadhaar’s very constitutionality has also been questioned. Aadhaar was passed as a particular type of bill in India’s parliament (a ‘money bill’) that only requires a majority in the lower house to be passed as law. The ruling BJP party has a majority in this house and a lack of checks and balances from the second chamber has resulted in civil society activists challenging its legality in court.

A further misgiving about Aadhaar is that it had become a mandatory identifier- making it obligatory for all Indians to enrol until the Supreme Court stepped in and annulled any such instructions from the government. The government push for Aadhaar meant that private sector telecoms operators and banks sent repeat notifications to all its customers to link phone numbers and bank accounts to an Aadhaar ID number. If individuals did not comply, there was a threat that phone connections would be cut and bank accounts shut. Ethical questions were raised around such bullying in India’s democracy, and again reinforced concerns of an encroaching Big Brother state.

There is also real anger that the poor in India are being used as guinea pigs for this digital ID experiment – with critical systems failures. In some areas, Aadhaar was not only made mandatory but was the only mechanism for the poor to access subsidies and other welfare services including food entitlements. This has disastrous consequences if machines fail to authenticate individuals. Official government statistics suggest that the failure rate is 12%, though this is contentious. The real problem is for those people who face multiple ID failures; which this has led to a number of deaths, (though with little reliable data on the actual numbers).

A recent report by global development analytics firm IDinsight undertook a three-state survey across India to unpack some of the polarised debate with evidence. It highlights that although the numbers of people excluded from rations because of Aadhaar failure in the State of Rajasthan was significant (2.2%), more people were actually excluded for other reasons such as ration unavailability (6.5% or 3.7 million people).

Most analysts agree that Aadhaar is still work in progress. Despite its shortcomings, it is the best identification mechanism in India right now. Rolling it back would be counter-productive given the potential costs for the most vulnerable people who have been already included in welfare programs since Aadhaar. While there is some disagreement on what should be done next (to stop the program or to continue), there is generally some broad consensus about ways to make the best of the current situation, as highlighted by the Pathways for Prosperity commission discussions in New Delhi.

The biometric feature of Aadhaar is reasonably successful in establishing a person’s uniqueness, although not always reliable at verifying people’s identities when they come to claim their entitlements. This could justify biometric authentication in some high-risk situations (e.g., registering for a new benefit), while making it optional for more routine tasks (e.g., weekly ration distribution). Many apprehensions, like the quality of the fingerprint, the ease with which finger prints can be stolen and the reliance on good quality internet and electricity (lacking in many rural areas) call for a broader discussion on what other technologies could be used to upgrade Aadhaar.

A legal framework and data protection regulations for the purposes of individual grievance redress, deterrence from misuse of the collected data by third parties, and ensuring government accountability, is very much needed. But can it be backfilled? An independent and empowered data protection regulator with the right mix of mandate, capacity and real teeth to enforce its powers, needs to be developed urgently as India’s digital appetite grows. There is a process underway to propose a legal framework around this, with a report to be published very shortly.

Most governments have records and information on citizens and residents alike – despite existential debates about protecting freedom. What is true is that technology and digital ID is highly emotive and always highly political. Necessary checks and balances are important to ensure a smooth functioning of the system, especially in a vibrant democracy like India. The Aadhaar experiment serves as a strong example that many other countries have tried to replicate – albeit with deeper national debates, better engagement, and effective legal and redressal frameworks in place to ensure protection of the poorest and most marginalised people. The experiment means that there are multiple issues that India still needs to grapple with, but Aadhaar has shown it can help to include millions of previously excluded men and women. 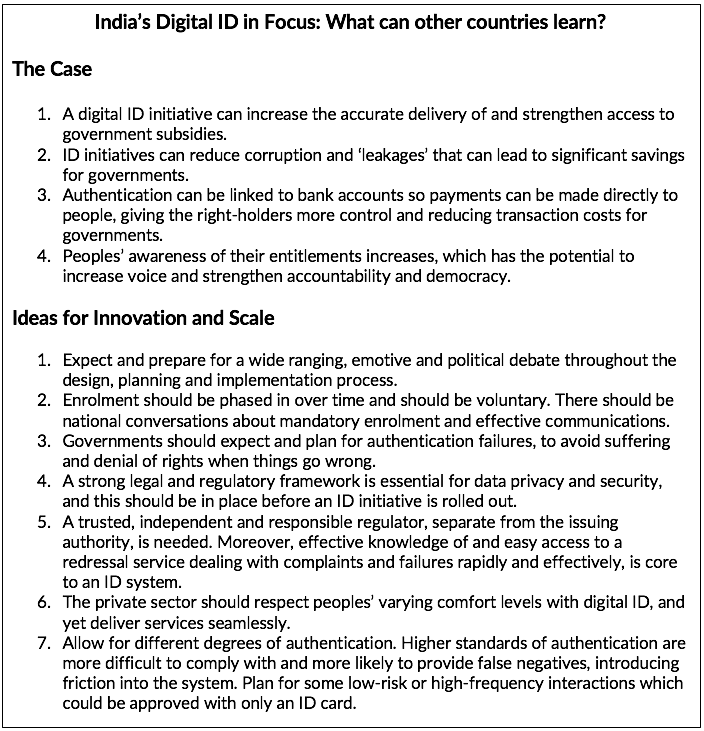 Prakhar Misra is an Associate with IDFC Institute, a think/do tank based in Mumbai, India.

Meena Bhandari is Head of Communications and Events for the Pathways to Prosperity Commission on Technology and Inclusive Development.